The Jeremy Show Interview: Rob Christopher's Pause of the Clock

I sometimes think when I am laying in bed, covered in Cheetos dust and watching Netflix that I consume so much art, media, music, and film but the amount that I give back is very small. I take some pictures, write a little, etc. Wouldn't it be great if we created  or contributed just a small portion of the amount of art we consumed? That's what I thought about when I gave what I could to my friend Rob Christopher's Kickstarter fund to finish his film "Pause of the Clock." At the time of this writing he has raised $9524. He needs $5476.  In nine days all that money that was pledged, will be flushed down the internet toilet if he doesn't raise it all.

His film was made twenty years ago- preserved in amber since the 1990's. I think if you look at the trailer, you'll be teleported back to 1995 and want to see more.

First, the most important question- What’s your favorite memory of me?
That summer afternoon we were hanging out on my back porch and you were smoking cigarettes and I took all those black & white photos of you with my 35mm camera.


Are you sure that was me? I don't remember that.
Yes it was. I have some them.

My favorite memory of you is you going with me to see Bette Midler...begrudgingly. Very sweet.
I'd forgotten about that till just now! I had fun.


How would you describe Pause of the Clock?
It's a movie about friendship and stories, and how two people can somehow communicate by working on a film together but can't connect on a personal level because they don't know how to talk to each other. It's also a movie about movies. How, perversely, it's easier to look at something honestly when it's in a movie than when you see it in real life. And it's also a study of the questionable fashion trends of the mid-1990s. Big hair, windbreakers, pastel t-shirts.

Why did it take so long to put this all together?
﻿﻿When we finally finished shooting the movie, in 1996, I was exhausted. I was really ready to edit the movie and finish it, but I was also flat broke. I was so tired of asking people for money and trying to get funding. The dream was over. It was time to get a job. I guess it took 20 years to build up the necessary energy to dive head-first into it again! Also, it wasn't until last year or so that I started to feel I could edit this film in such a way that it would work. It was much easier, 20 years later, to start from scratch and be pragmatic about what scenes worked and didn't worked.
Are there parts of your autobiography in this film? Traumas, childhood, etc...
There's a ton of between-the-lines stuff, but I don't know that all that is so important to the audience. It's important insomuch as it adds a lot of texture to what's on screen, and makes it feel more real. Anyway, I don't want to go into all that. Gotta preserve the mystery.


Did you have any reservations about crowdsourcing?

The single best piece of advice I got before starting to plan my Kickstarter was from my friend Gabe. He said, "You have to consider it a full-time job." He was right. It's been a lot of hard work, but it's also been exhilarating to see people get excited about this weird little movie. I was, and still am, nervous about such a risky undertaking. But I also don't know anyone who would be ready to write me out a check for $15,000. Crowdfunding was the best option to get the money.

So you were raised pretty hard core Christian, tell me about that and tell me if religion or spirituality still plays a part in your life.
I was. I was still very much a church-going, committed Christian when I started making "Pause of the Clock." But less than a year after we finished shooting it, I finally started coming to terms with the fact I was gay and stopped going to church and drifted away from religion. Even today, personally, I do not find Christianity compatible with being gay. Or a lot of other things that are important to me. Maybe this is shocking to admit, but I guess I don't really consider myself that spiritual. Zen, maybe. John Cage zen. Que sera sera is my motto and has been for a long time. 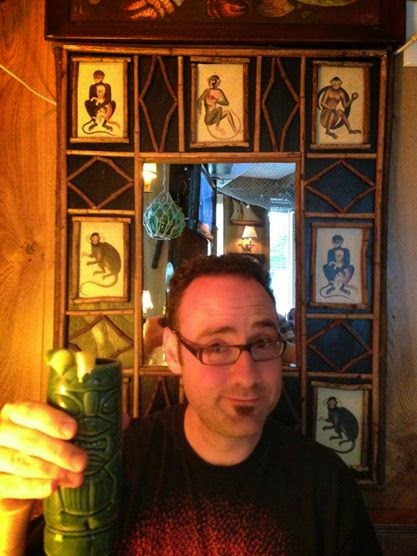 We both went to Columbia College. Is there anything at Columbia that actually helped you with filmmaking?

I have often said that I learned more about filmmaking from my poetry class, taught by Art Lange, than I did from any of my filmmaking classes. Now partially this was just me being a know-it-all kid who wanted to do things his way and didn't understand that Columbia is, primarily, geared towards being an industry school. Any art that occurs gets in through the cracks, not through the front door. To look at it another way, Columbia actually did teach me a lot about filmmaking; only, they weren't lessons I wanted to learn. I learned that the industry is rigidly broken down into roles, and genres. And woe to them who try to be a "total" filmmaker, or try to make anything that's hard to classify. Columbia helped me the most by nudging me into concentrating on my writing. I'm a much better writer because I got so disillusioned with filmmaking that I stopped doing it for so long. That, in turn, has made "Pause of the Clock" a much better film now simply because I'm a better editor now than I was back then, because I'm a better writer.

You are a big fan of David Lynch, what is it about his movies that you love?
Seeing "Twin Peaks" in eight grade was a eureka moment. Along with seeing "True Stories" for the first time, it made me realize that film could do more than just tell a story. I have basically been obsessed with David Lynch ever since. The most important lesson he has for filmmakers is that one must respect the mysteries of life. Mystery is a thing to nurture and cherish, not to explain away. Lynch has helped me see that you really have to trust your gut as a filmmaker. Your gut is a much more valuable tool than your brain. Or rather, without your gut your brain will always get you into trouble.

If your movie became a huge hit would you ever consider moving to LA?
No.

Do you have any other projects in the works?
I am nearing a finishing point on my work-in-progress, "3 Things about 1000 Movies." I would still love to turn it into a book with drawings. For my next film project, whatever that turns out to be, I'd really like to collaborate with another writer and fashion a screenplay. The thought of working together with a writer and bouncing ideas off each other really gets my juices flowing.


You are having an Oscar party! What kind of punch are you making this year?
I haven't settled on my punch recipe yet. A bit worrisome. Some people agonize over their Oscar ballots, I agonize over what punch to make for my Oscar party.


If you were going to have themed foods for each Best Picture nomination what would they be?
"American Sniper" would be, umm, a bowl of really spicy chili mac. "The Imitation Game" would be a bowl of Skittles. "Birdman" would be a platter of chicken fingers with Velveeta dipping sauce. "Boyhood" would be, I dunno, something with tater tots and BBQ brisket. "Selma": Hoppin' John. "Whiplash": chicken fried drumsticks, haha. And "The Grand Budapest Hotel" would be an elaborate tray of hors d'oeuvres that no one was allowed to touch.


Tell me your thoughts on the movies nominated for best picture. What movies are missing from the list, what movies shouldn't be on there?
Mostly I'm just pleased that "Boyhood" is on the list. The others, I haven't seen all of them but you know, it is what it is. I wasn't surprised but was still disappointed that "Interstellar" was missing. And really, really irritated that "Life Itself" wasn't a Best Documentary nominee.

So about the time Harry Potter finished up...you posted the ending online- which was very controversial in our little blogosphere at the time. I think you have an aversion to pop culture and things that are overhyped, etc. Is it about the content, the value of the mass media- what is that about?
No, it's about this completely annoying, repulsive sanctity we seem to have for spoilers. Spoiler alert this, spoiler alert that.


Luckily you took me to Trader Vic's at the Palmer House before they closed. There will never be another place like it. Tell me about your love of tiki culture? Where did that come from?
It's a beautiful form of escapism that partially inoculates me against cynicism. If I'm sitting in Lost Lake with some friends, listening to some steel guitar tune and sipping on a powerful rum drink, at least at that moment everything's all right.

Tell me why people should crowdsource your film.
It's a 16mm time capsule unlike any other indie film project out there. It captures the mid-1990s but also tells us something about our own time, what has changed and what hasn't. It's a fun, homegrown movie. It's got some awesome music in it. And, every pledge counts! It all adds up.

Tell me everything that’s in your backpack or bag.
Diary notebook, cell phone charger, Kleenex pack, Moleskine daily planner, a pack of cold tablets, iPod, combination padlock, Norman Mailer's "Miami and the Siege of Chicago," and a single strawberry Starburst.

Pledge whatever you have here and read more about Rob Christopher on his website www.randomcha.net

Posted by Jeremy at 1:50 PM No comments: