"If you don't wake up on good sheets right now. You're kind of sending yourself a message," Nate Berkus says about his Percale 220 thread count sheet set. He's on HSN selling cheap stuff. He has a point. If you wake up on sheets you haven't washed in months (like I have been doing) you're sending yourself a message. 220 thread count though? A suspicious number. I wouldn't exactly call these good sheets. Don't try to pull the cotton/polyester blend over our eyes.

I have a love/hate relationship with Nate. He is the gay man I think I should be. Kind, attractive, well dressed, best friends with Oprah. I hate myself instantly when he is on television. The perfect hair, the eyes, the ability to speak to people. Such self confidence. He does look a little scrubby this morning though. Was he out late at the bars in St. Petersburg near the HSN studios? I can't imagine he's still up to that. Maybe he was out shooting another piece for Oprah. "Knock, Knock, It's Nate!" Knocking on another heterosexual couple's door and making over their house. Screams from the audience, the wife cries, Oprah yelling. He is the metrosexual asexual homosexual magician that is acceptable in Oprahland.

One suggestion Nate has is to buy these sheet sets and then invite your friends over for the holidays to sleep on and then say, "I actually want you to take these with you..and see what they say." Your guests come over for Christmas and bring you a normal gift. You tell them, "Those sheets your sleeping on, Merry Christmas." Thanks a lot.

A woman just called in and stopped the show and made everyone very nervous. "YOU DON'T MAKE TWIN SIZE. There are a lot of widows and widowers out here like me." I love these moments on HSN. Nate and the host don't miss a beat, thanking the crazy lady for the suggestion and promise they will speak to the buyers and bring that up.

A reviewer on the website says, "Don't want to give a bad review because I want Nate to do well on HSN and it's his first shot. I got these sheets in the pale pink but was disappointed that they were actually peach so I could not use them. Had to send them back. Hopefully, colors will be true to picture in the future."

I too want Nate to do well on HSN. I need him to be on HSN. Just like the crazy lady who called in.
Posted by Jeremy at 8:10 AM 2 comments:

I stumbled upon Ace Mart Restaurant Supply today. The range of products available for purchase is extraordinary. In these difficult times, it eases my anxiety somehow to think about the roles these classic pieces played in our lives.

I believe this mug was designed for mildly depressing continental breakfasts at La Quinta Inns. It's the mug you drink out of while studying yourself in a mirror and questioning why you packed what you are now wearing. There is a sense of excitement about the day. The air smells of chlorine from the pool that is perpetually closed. You forgot your keypass card in the room. You have to wait to go back up to get it because someone is checking when and where to meet the shuttle bus. You wait patiently and sleepy sipping on the warm brownish water that they call coffee.

You know this snap drape. It takes a snap drape to know a snap drape and you're the snappiest drape I know. It's been at all the job fairs and depressing banquet style receptions you've ever been forced to attend. You're pretending to celebrate a wedding or some vague anniversary, spooning up your baked mostacolli, not even thinking about the seventy bucks someone paid for this pleated number designed to hide the legs of a collapsable table.

You have anxiety problems and you can't handle the period of waiting between finishing eating and your server bringing the check. You want to leave. You need air. You need a cigarette now. You're done talking. But the check isn't coming. You think about asking the waiter/waitress for the check but you've done that before and your friends implied that it was rude. The check is never going to come. Then you have to decipher the check and figure out the tip and then play the "I got it," "No, you got it last time, It's my turn" game for the required period of time. It's all too much. It's just too much. You just want to leave but you can't. Do you go up to cash register or pay at the table? And now someone has to go to the bathroom. You're just going to wait outside.
Posted by Jeremy at 8:50 PM No comments: 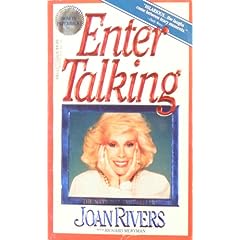 When I moved to the Chicago suburbs from San Jose, CA I spent a lot of time at the library. This was the summer before my sixth grade. I didn't know anyone and had little to do. I wanted to check out the audiobook "Enter Talking" by Joan Rivers (The title of which is based on advice someone gave her about doing standup- that she should always enter the stage talking, so there was no lull, so the energy was up). The librarian at the Crystal Lake Public Library had to call my mom and ask for her permission for me to check out a Joan Rivers book.

I recently found myself at the library again checking out a Joan Rivers book. Regressing. This time there was no hassle from the librarian, besides maybe a raised eyebrow. It was her motivational book, "Bouncing Back (I've Survived Everything...And I Mean Everything..And You Can Too!)" I didn't plan to read it all, I just thought, "what the hell, it can't hurt." I can't put the book down. The book is a strung together collection of motivational bumper sticker "get on with it" sayings infused with Rivers' life experience: her husband commiting suicide, being fired from her Late Night Talk Show, banned from the Tonight Show, the collapse and rebirth of her Jewelry company.

Why do I feel the need to educate you about Joan Rivers! Ugh, I'm so disgusted. Here's Miss Piggy and Joan Rivers. Happy Sunday. Whatever.