This 36 year old sassafrass hosts my favorite show Big Brother and has been dubbed "Chenbot" for her stiff delivery. Besides hosting BB, she is also a cohost of the CBS early show and the wife of CBS president Les Moonves, Okkaaay! Girl knows how to marry!! According to Wikipedia, she failed entrance exams for the Bronx High School of Science and said to hell with it and marched her way through college ending up with a journalism and English degree. She doesn't mind being called Chenbot, "adding that it may derive from her 'precise on-air style' which comes from "a desire to be objective." I don't care I just love her hair and her outfits and SHOES and blue notecards. The way she hosts a silly old show like Big Brother like shes reporting on genocide gives me chills.

Posted by Jeremy at 8:42 PM No comments: When you open up your mouth to speak
Could you be a little weak?

When you're trying hard to be your best
Could you be a little less?
Posted by Jeremy at 10:10 PM 1 comment: 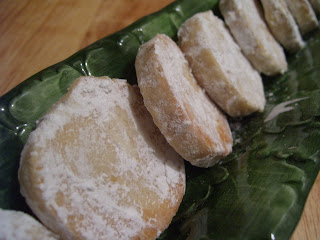 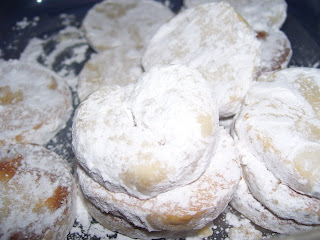 I begrudgingly made some lemon meltaways to try and cheer myself up. Real down, kids. I'm not a fan of powdered sugared covered things but I had all the ingredients in my apartment so, you know, why not? They are real tart. Sort of like a lemon sour patch kid. The recipe was from Martha Stewart but she suggested lime. I don't have any lime so I used lemon. I still have another "log" of dough in the freezer that I can bring out to slice and bake when I have "guests."

I am real hot. On fire. Andropause.
Posted by Jeremy at 8:10 PM No comments:

and her speech, if your so inclined...

Email ThisBlogThis!Share to TwitterShare to FacebookShare to Pinterest
Labels: madonna

no capitals? no problem.

the president should be chosen on a reality show competition. i think it would make a lot more sense than electoral colleges and superdelegates. i think hillary and obama and mcain should have to do challenges each week. like one week it would be who gets closest to ending a war. the budget for the show would be taken out of our taxes or something (its in the planning stages right now, i'll iron out the kinks as we get closer to production). anyway, so each candidate would be given a certain amount of money-- a billion dollars or something. whoever gets closest to ending the war moves ahead and the person who screws up gets sent home. i would be the host of the show and would eventually choose who is president of the united states and it would be hillary clinton. unless i decide i dont like her. there are a lot of times when im watching a reality show that i think i like someone but they say something dumb or start acting up, get too cocky and i'll decide i don't like them. things change when you're being videotaped 24/7. then i might decide that i like obama better. then he could be president. but the main thing are the challenges. i need to see them in action to decide who is better. i think this is what our forefathers would want as far as im concerned. and i am concerned.

from my vantage point, on my couch, smoking my cigarettes and eating macaroni and cheese -there is a lot going on thats not good. i think its time for a change. but i dont see any other way to handle it other than a reality competition.

i watched big brother last night and i think its a great show. a real class act that you are missing out on. get involved. i watched oprahs big give. blah. i love oprah but im sick of her dragging around that nate berkus that everyones so crazy about. i saw his line at linens n things or bed bath and beyond or whatever and i wasnt impressed. lots of oversized decorative wooden bowls that are supposed to hold decorative wicker balls. so stupid. it was all on clearance. real depressing.

whats with the lincoln park ladies and bringing there lunches to work in bags from high end retailers. gives me a headache. i probably mentioned it before but its real trashy. its like wearing big sweatshirts with rubber logos on them. get with it. a classic brown paper bag would suffice.

it was a real freak show on the train today. very jacobs ladder. distorted faces and people that looked not well. it was probably me. its probably a side effect of one medication or the other but i had to close my eyes and listen to some janet jackson to take the edge off.

lost my debit card in the atm machine. they dont need to make the kind that take your card in anymore. its asking for trouble. i have enough money problems as it is-- then you take my card away. get out of here.

im in one of my "clear it all out" moods. everything in the garbage. sanitize and start again. i want a clean blank canvas. too much crap.

the best tip from martha stewart? just a spray bottle with dish detergent and water. never have to buy any kind of ripoff cleaning agent again. soap. usually works for most things, people. and water. soap and water. for cleaning. exactly.
Posted by Jeremy at 8:32 PM No comments: